Since 2016, the railway between Sihanoukville, Kampot, and Phnom Penh was reestablished, connecting the southern port with the capital. It’s a long 7 hour journey, but one worth taking if given the opportunity.

On the day we traveled, the train left at 7:00am from Sihanoukville station and only ran on weekends. Since there are only a couple of cars, I would suggest getting to the station a bit early. There was also a bad truck accident at the port that closed the only road into the train station. Our taxi driver had to drop us off a bit away from the station and we had a walk a ways to get there.

There was a woman sitting at a desk in the station selling tickets. No haggling required (unlike buses) the prices are published and she charged us accordingly. There is also the option to bring your car, motorbike, or just about anything along for the trip. It’s pretty convenient if you want to avoid the dangerous drive between cities. The train makes a total of 4 stops, Sihanoukville – Kampot – Takeo – Phnom Penh.

The trains themselves are meter gauge, originally French built DMUs. This means they used to power themselves. Today, they’ve been refurbished and the original drive motors have been removed. In their place are electric generators that supply power to the cars for excessive air conditioning and lights. It’s genius because this allows the railroad to pull the train with existing freight engines. 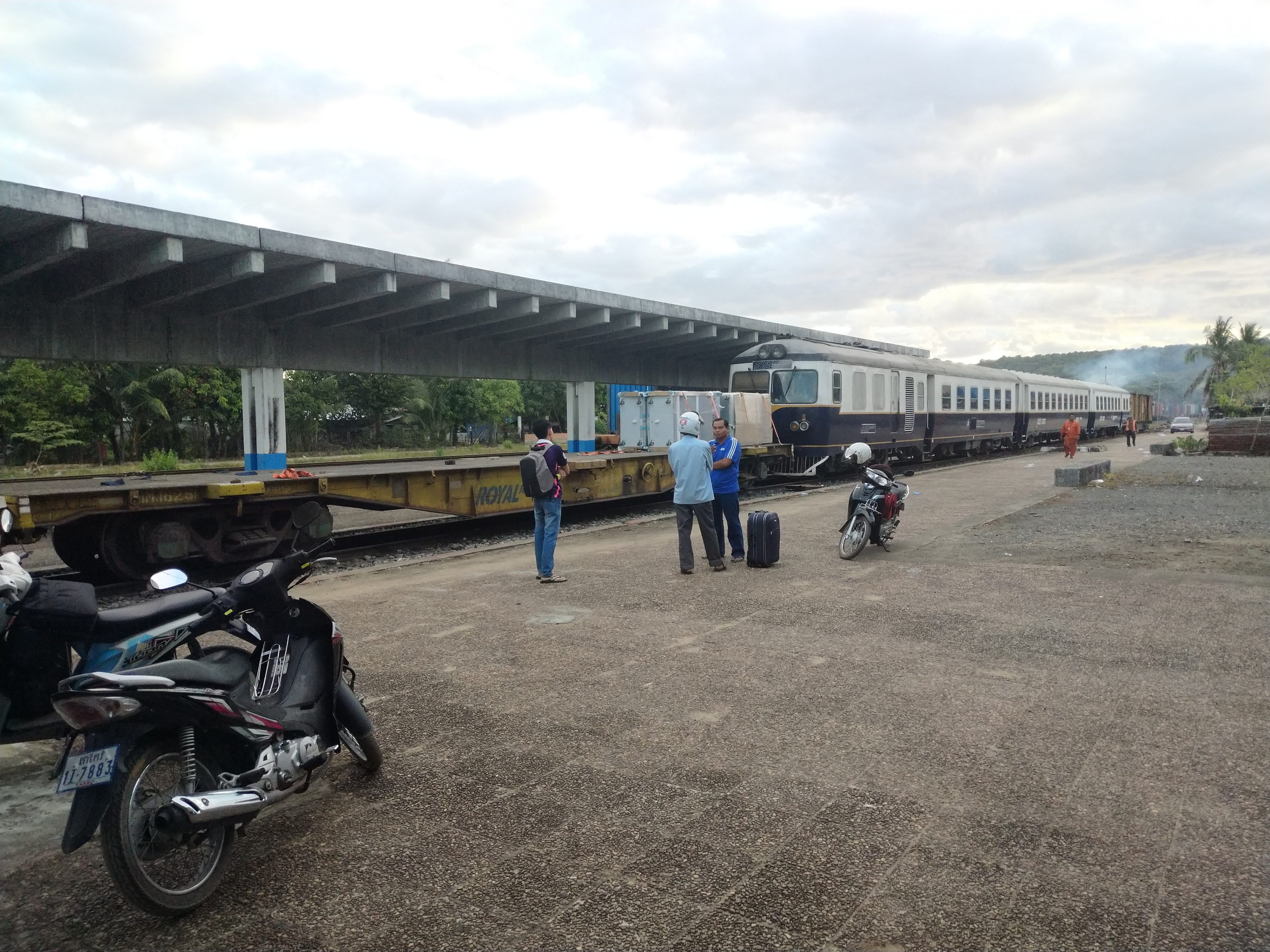 The interior of the cars is comfortable, if not a bit basic. These were originally designed for commuter style service, so a 7 hour trip is a bit long for the seat design. No food is sold on the train, but you can buy food at most of the stops. I’d recommend bringing some food with you if possible. Some of the people on the train didn’t want to buy food from vendors at stops and I can only imagine how hungry they were at the end of the trip.

One other word of warning, if you get cold easily – BRING A BLANKET! Also, consider sitting in the cars where the crew sit as they didn’t seem to keep it nearly as cold as the car with tourists. 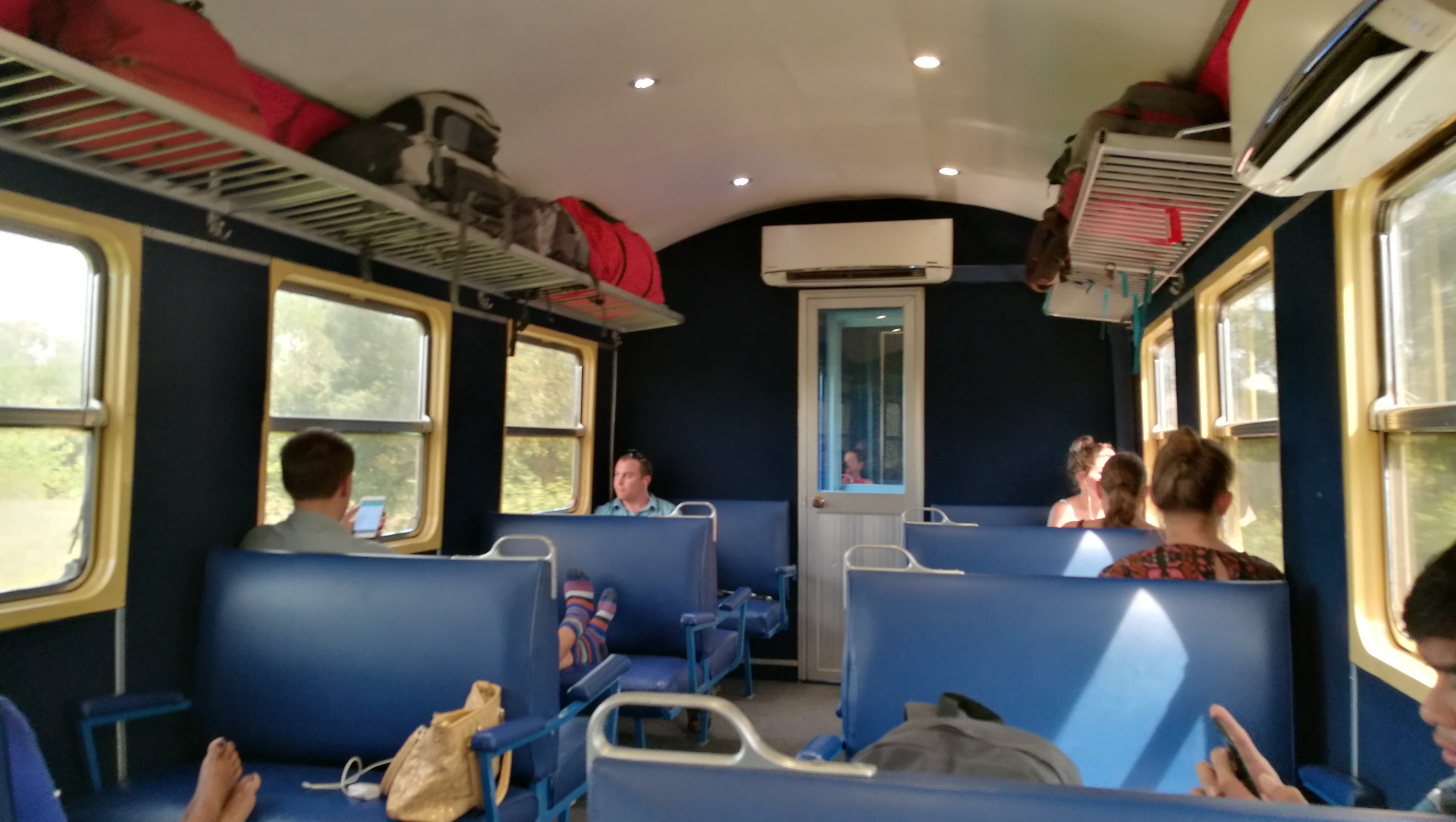 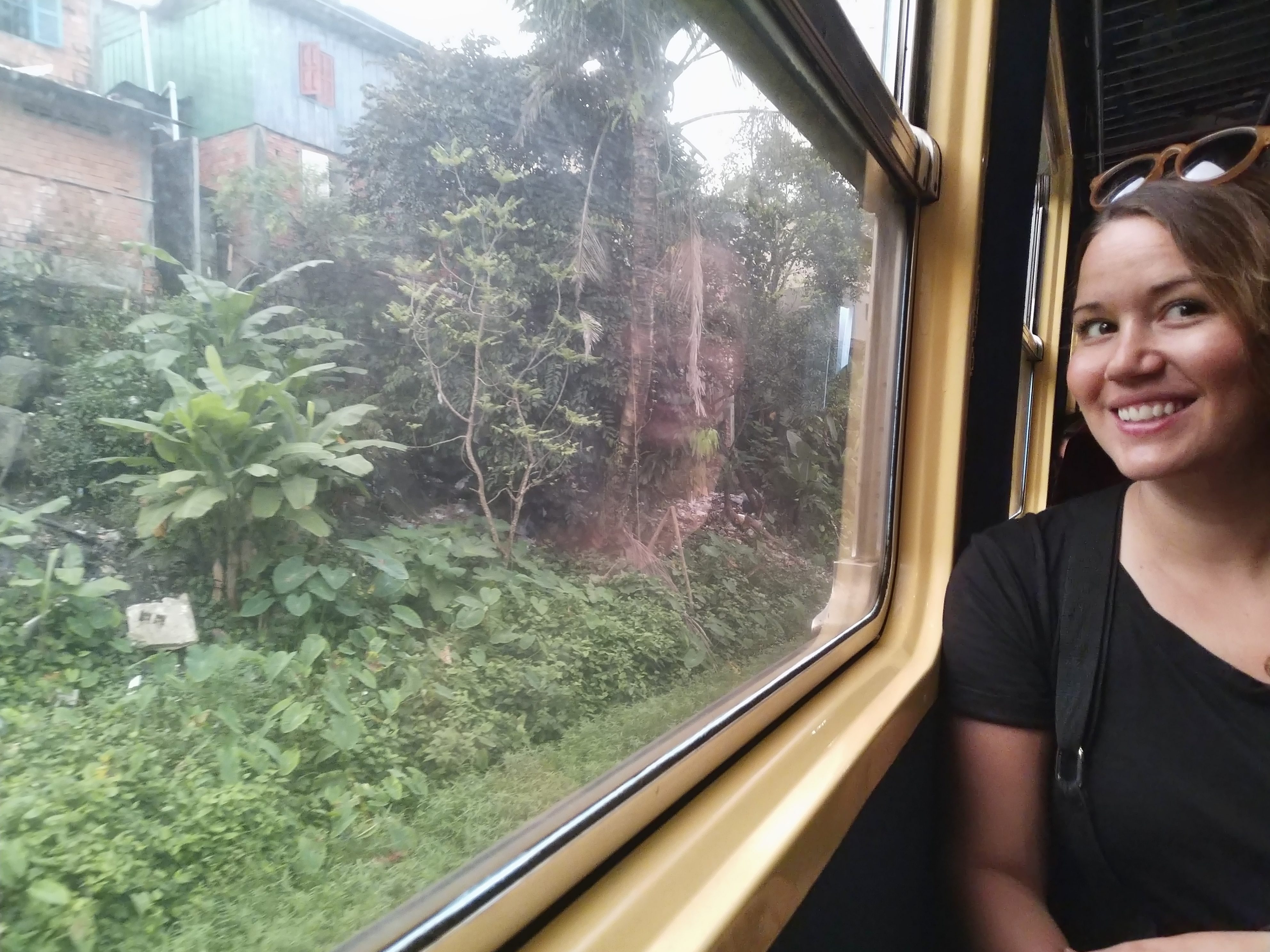 The scenery changes throughout the trip. It varies from rocky hills, to rivers, to marshland, to rice fields, and urban sprawl. Much of the route is the region just northwest of Vietnam’s Mekong Delta, and it has a similar feeling. Needless to say, it is also very warm there just about any day of the year!

The train stations themselves are interesting. Only the Phnom Penh station was “French Built.” It’s my understanding the others were built in the 1960s in the New Khmer style of architecture.

Cambodian train employees are very relaxed about where you can be on the train. Exploring is a lot of fun. You can see inside the old cabs of the powered train cars. It’s really cool and lots of the labels are still in French around the cab. You definitely get a sense of the history of the train cars from this vantage point.

In my opinion, the best place to ride is between cars. Even though it was blistering hot in the sun, if you stayed covered, or in the shade, the breeze was cool enough. It gave an unobstructed view of the countryside and the people who live there. The train is still so infrequent that people and children look and smile as the train passes. A unique experience. 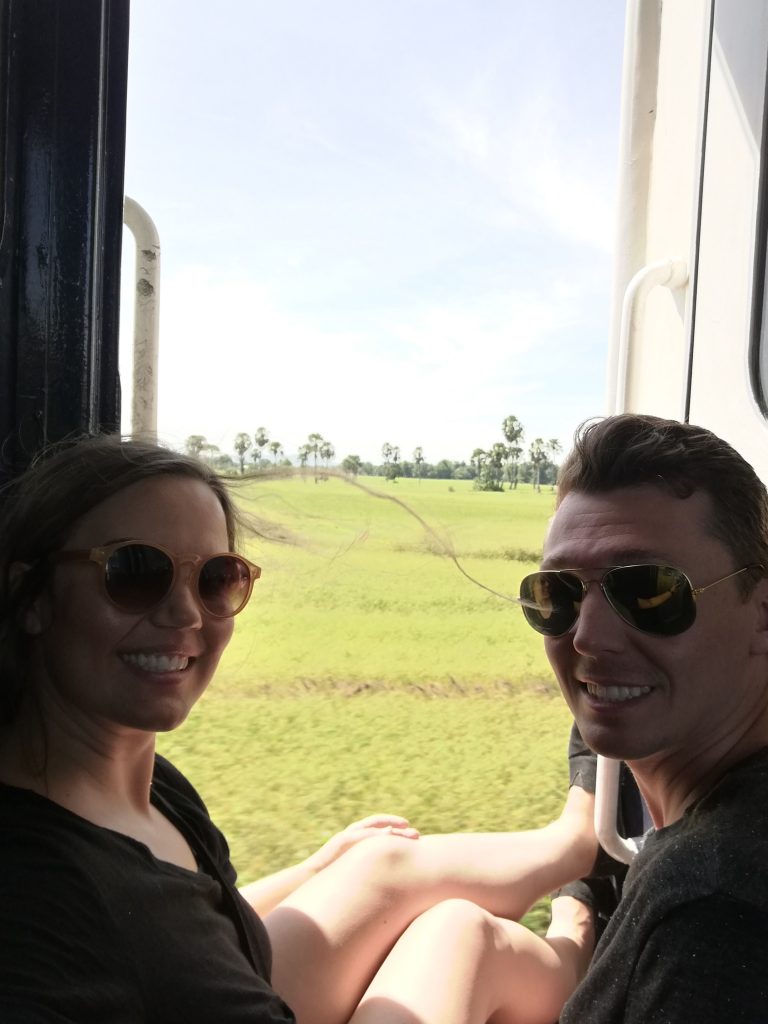 About halfway to Phnom Penh we passed the southbound train. That train was even fuller than ours. A number of people came out to take pictures as we passed each other. It is cool to see people excited about trains.

Coming into Phnom Penh the countryside gives way to dense urban areas. The roofs of peoples houses come so close to the train it’s amazing they don’t hit. It’s one place we decided to sit inside as to not get hit by anything.

Finally, the train station in Phnom Penh is beautiful. There are plans to make more and more trains stop at this station, but as of now there is only the weekend service between Sihanouk and some trains to the city’s airport. The station itself holds a lot of historical significance as the location of some of Cambodia’s pivotal political events in the 1960s and 1970s. It looks well restored and makes for a great end to the memorable train journey. 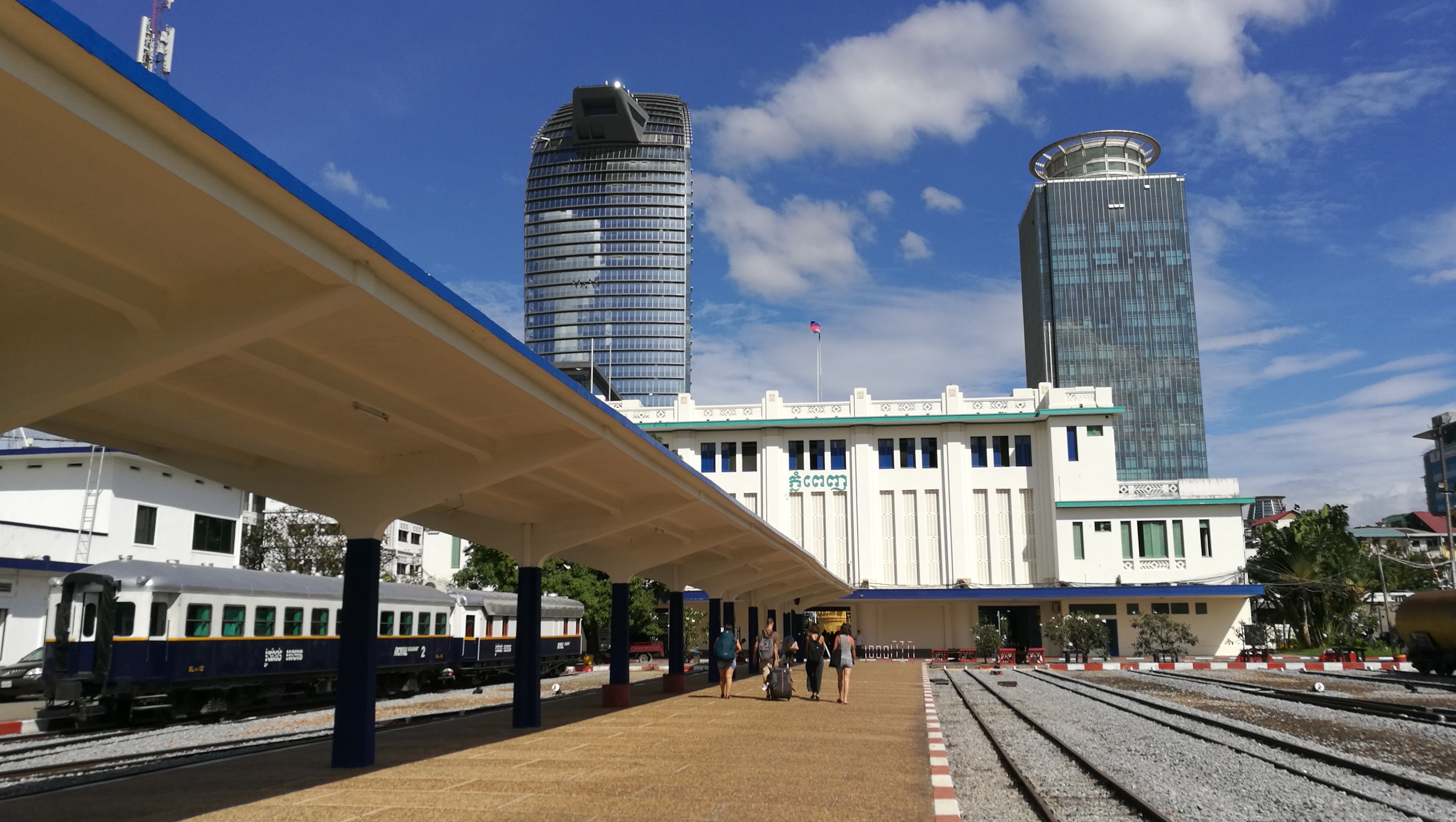 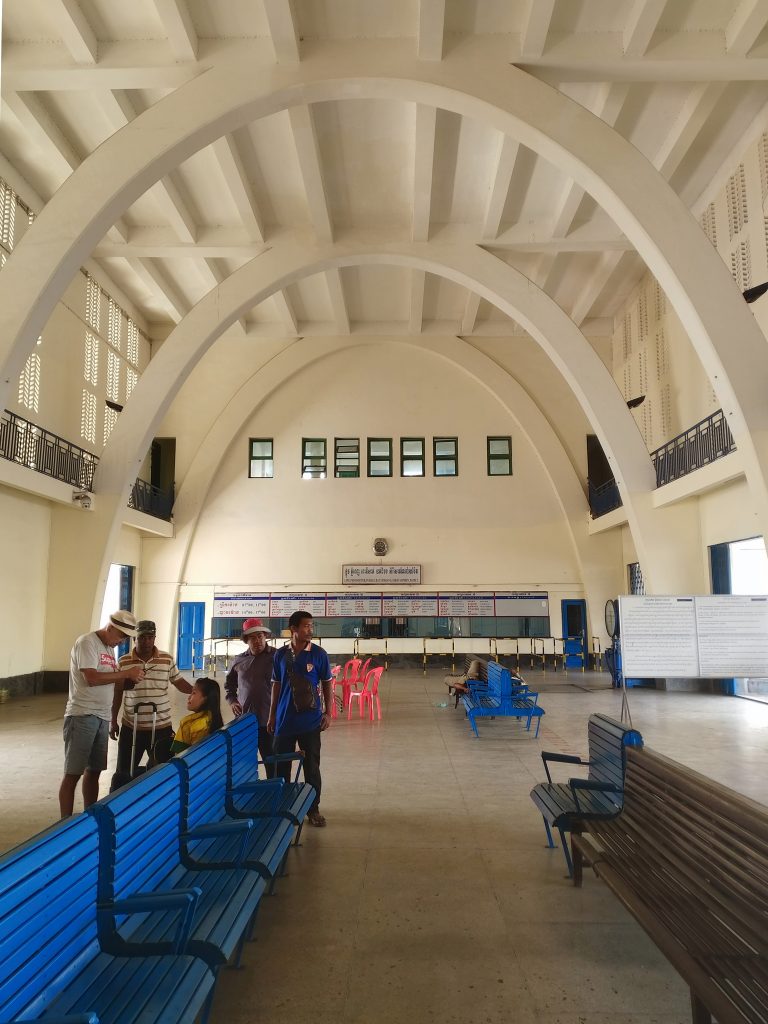 Thanks for reading and be sure to comment below! 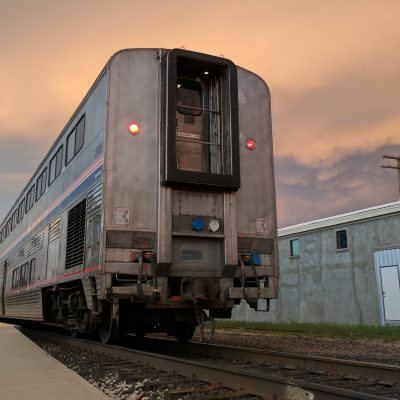 Amtrak’s Empire Builder – in the Winter! 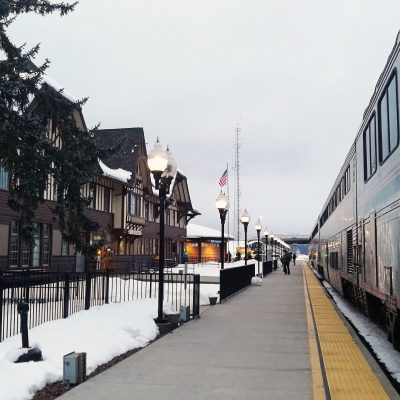